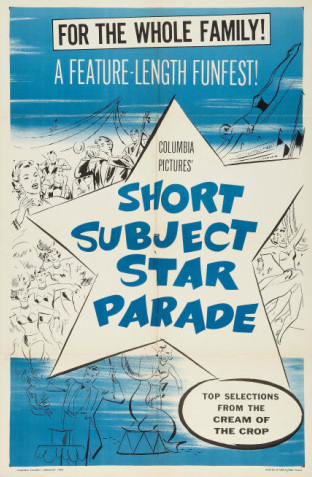 ﻿Here we'll explore the various compilation films that were released to theaters. As Columbia continued to reissue their short-subjects, they also offered special programs or "festivals"...from cartoons to comedies to musical shorts.

Another aspect of these festivals were those compiled by theater owners. It was very common to find a theater offering a "Cartoon and Comedy Festival" on Saturday mornings or during a school break or holiday. Many times (through researching newspaper archives) these festivals were composed of cobbled together shorts from different studios (for example, a Paramount Popeye cartoon could be followed by one of UPA/Columbia's Mister Magoo titles or vice versa).

Please keep in mind that there were literally thousands of these independent festivals, so not every single custom compilation is going to be represented here, an images shown are for examples only. The main focus of this page is to feature those officially offered by Columbia Pictures.

The undated poster to the left is most likely promoting a festival of Ben Blake-produced musical or variety reels.
LAFF HOUR (1/1/1956)

The only LAFF HOUR film footage created by Columbia was a special title leader, and a trailer.