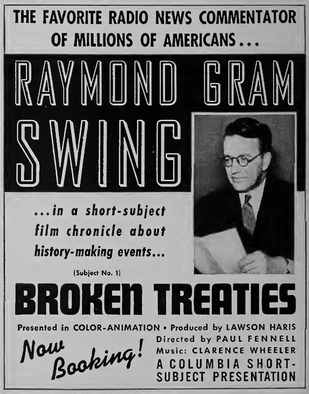 An animated series of historical subjects designed to bring the U.S. public up-to-speed with what was happening in Europe and summarize the events that were leading to World War II. Directed by Paul Fennell and narrated by news commentator Raymond Gram Swing, the series was an attempt to use animation as a mass-communication for serious subject matter.


There is confusion about the origins of these films. In 1940, Ub Iwerks had completed his last Color Rhapsody cartoon for Columbia Pictures. He turned the keys to his independent studio (Cartoon Films Limited) to producer Lawson Harris and animator Paul Fennell who were determined to make a go of it. Their first order of business was completing a final cartoon (The Carpenters) to fulfill Iwerks previous contract with Screen Gems.

A new deal between Columbia and Cartoon Films Ltd. was reported in Oct. 1940, for a new series of historical animated shorts featuring radio commentator Raymond Gram Swing. Swing was a respected print reporter and well-known radio journalist who was a leading voice against the growing Nazi threat during the 1930s.

Though the first short was produced in 1940 (announced for a Nov. 5th release by Film Daily), and apparently six shorts were commissioned, only two were made and released in late 1941. In January 1941, Daily Variety announced that the Fennell-Swing shorts were to be the first subjects released in three-color Dunningcolor (an early rival of Technicolor). Here are a few other news reports from Motion Picture Daily:

Motion Picture Daily – January 29, 1941
Raymond Gram Swing, the WOR-Mutual commentator, is making a series of shorts which Cartoon Films, Ltd., is producing and Columbia Pictures will release when they are completed. Swing will write his own scripts discussing, as he does on the air, some military or political aspects of the present war. Color cartoons will illustrate the talks. No release date has been set. Swing recently completed a year-end summary for RKO Pathe News.

Motion Picture Daily -Tuesday, February 11, 1941
FIRST of a projected series of 6 one-reel animated subjects on the war, with script and commentary by Raymond Gram Swing, has been completed and will be released shortly by Columbia, according to Lawson Harris, president of Cartoon Films, Ltd. Six of the films, in the series titled “This Changing World,” are scheduled for release this season. All are in color.

For unknown reasons only two parts of this series were released in 1941. Even stranger, they seem to have been released in reverse order. The speculation is that the shorts were already a dated by the time they were ready for release. The first short produced was apparently How War Came (though that title doesn’t appear on screen). This film is designated “Volume 1, Chapter 1″ and ends with a tag noting that another of these shorts “will be shown in this theatre soon”. Released a month before Pearl Harbor – it’s a strong overview of the situation.

Film Daily Trade Review – Monday, December 15, 1941
“How War Came”
(Raymond Gram Swing Historical)
(Columbia)
The popular radio commentator, Raymond Gram Swing, undertakes to explain the beginnings of the war. For this explanation, Swing sketches the background of events which precedes the outbreak in 1939. His points are emphasized by interesting, color animations. Although the reel has no reference to the U. S. declaration of war, it is extremely timely and should be effective now. Running time, 8 mins. Release: Nov. 7, 1941.


Film Daily Trade Review – Wednesday September 10, 1941
“Broken Treaties”
(Historical Reels)
(Columbia)
The “broken treaties” dealt with are those of Adolf Hitler and though the subject could hardly be considered new, it is given unique presentation. Utilizing cartoon sketching, the short reviews the Nazi conquests and Hitler pledges, which were never fulfilled. Raymond Gram Swing is the narrator. In color. Running time, 8 mins. Release, Aug. 1, 1941.

Long forgotten today due to their dated nature, The This Changing World films were seen and noted in their day – How War Came was nominated for an Academy Award for Best Cartoon Short in 1941. Why the series was cut short is unknown – perhaps the concept of an animated “current events” series was too time consuming to be practical – but I believe these were the template for Disney’s Victory Through Air Power, numerous propaganda and training films made by the Army and the very idea that animation could be used in other ways than just for laughs.