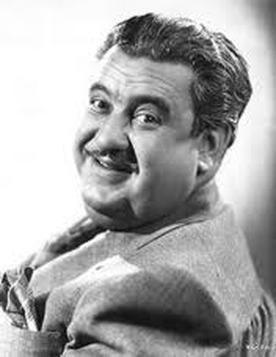 _
Billy Gilbert was no stranger to short-subjects having appeared in scores of two-reel comedies for Hal Roach, Educational and RKO.

In the 1930's, Gilbert appeared in a few Columbia shorts supporting fellow comics like The 3 Stooges and Harry Langdon, but it wasn't until the early 1940's that Columbia signed him to headline his own series of shorts.

The Billy Gilbert series was syndicated by Screen Gems Television in 1959.

_
SHOT IN THE ESCAPE (8/6/43) D: Jules White. Cliff Nazarro, Grace Lenard, Barbara Slater, Kathryn Keys, Charlie Hall. Billy and Cliff get their clothes wet when they try to help a woman across a muddy street; while drying off in her apartment, her jealous husband shows up. TRIVIA: Cliff Nazarro shares above-the-title billing in what is basically a reworking of the Laurel and Hardy feature BLOCK-HEADS (1939)