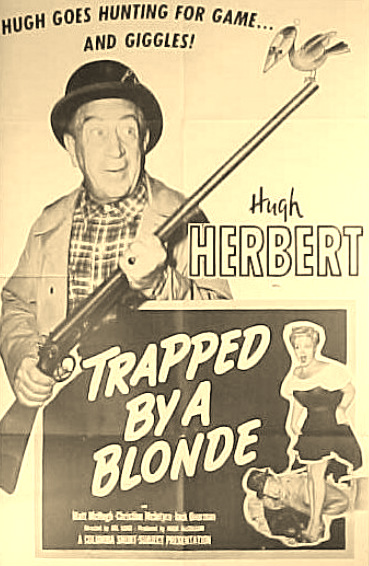 
Hugh Herbert was seen in films for years as a popular supporting comedian, most notably in films for Warner Brothers, RKO and a series of starring vehicles at Universal. The majority of Herbert's work in two-reelers are from Columbia, who offered him a starring series in 1943, resulting in 23 comedies.

The group of shorts are a mixed bag...some good, some not so good. Herbert's series is highlighted by a handful of fun "scare" comedies that co-star Dudley Dickerson. The series lasted until Herbert's death in 1952.

According to writer/director Ed Bernds, Herbert felt the series of two-reelers he appeared in where beneath his dignity, and that he was a much better artist. He never gave his 100% when making the films, and it sometimes shows that he had a "I don't care" attitude towards the production.

Several of the Herbert comedies were syndicated by Screen Gems Television in 1959. 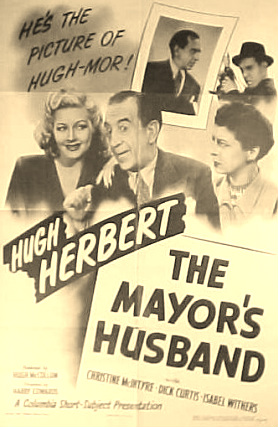 _PITCHIN' IN THE KITCHEN (9/10/43) D: Jules White. Dorothy Appleby, Vi Athens, Frank Sully, Johnny Kascier, Minerva Urecal, Symona Boniface, Al Thompson, When his wife gets a job in a defense plant, Hugh stays home and does the housework. TRIVIA: Remade as THE GINK AT THE SINK (1952).

WOO, WOO! (1/5/45) D: Jules White. Christine McIntyre, Dick Curtis, Harry Barris. Hugh, the Chief Worrier of Why Worry Inc., is hired by a pretty young wife to make her husband jealous. TRIVIA: The original working title was I SHOULD WORRY. 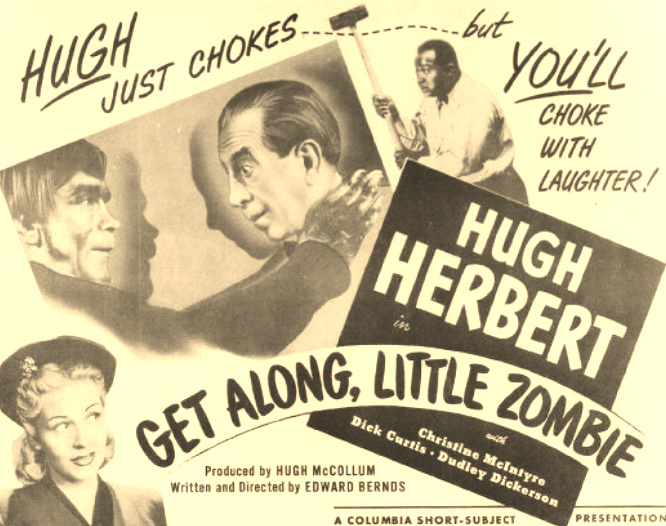 TALL, DARK AND GRUESOME (4/15/48) D: Del Lord. Dudley Dickerson, Christine McIntyre, Charles Heine Conklin. A crate containing a live gorilla is delivered to a mountain cabin Hugh has rented. TRIVIA: This was one of the best received Columbia shorts of 1948.

TRAPPED BY A BLONDE (4/7/49) D: Del Lord. Christine McIntyre, Matt McHugh. Hugh goes on a camping trip with his brother-in-law and innocently gets involved with the sheriff's wife. TRIVIA: Reissued theatrically in November, 1958.

A SLIP AND A MISS (9/9/50) D: Hugh McCollum. Jean Willes, Gay Gail, John R. Hamilton, Victoria Horne, Minerva Urecal, Dick Curtis. When his wife begins to divorce proceedings, Hugh tells his side of the story to the judge. TRIVIA: Theatrically reissued in February, 1958.

A SLIP AND A MISS (RARE FRENCH VERSION). French dubbed version of above film. French voice-over actors are credited at the end of the film. Very rare.

THE GINK AT THE SINK (6/12/52) D: Jules White. Christine McIntyre, Frank Sully. Hugh cant find a job, so his wife goes to work, leaving him to do the household chores. TRIVIA: A remake, with stock footage, of PITCHIN' IN THE KITCHEN (1943).