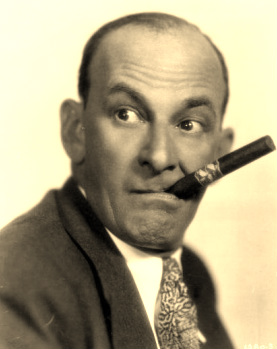 Leon Errol's stay at Columbia was a brief one. The first short he appeared in was called POOR FISH. While Columbia's own shorts division was still in it's earliest stages of development, POOR FISH was a independently produced by the Lamb's Club, whose comedies were billed in trade ads as "Sunrise Comedies" and "Lamb's Gambols" and distributed by Columbia.

When the Columbia shorts department was up and running, Errol was signed for his own starring series. This resulted in four "official" Leon Errol shorts for the studio. In between assignments at Columbia, Errol would freelance between RKO and Warner Brothers/Vitaphone, where he appeared in a handful of early Technicolor musical shorts. Upon completing HONEYMOON BRIDGE for Columbia, and after an argument with studio executives who cited "creative differences", Errol left for Radio Pictures.

At Radio, soon to become RKO, Errol continued his series of two-reel subjects in between feature film appearances. He returned to Columbia one more time in 1943 to appear in the wartime government short A FAMILY FUED, then back to RKO, where his successful series of shorts would last until his death in 1951.

As Leon is getting his life back together with a new wife, his ex-wife moves into the apartment next to his.

Leon sings THE MAN ON THE PARALLEL BARS, a song that's theme is used during the opening credits to a handful of early Columbia shorts.

The original working title was SCRAMBLED WIVES, a title which appears on early press releases.

Lucille Ball makes one of her earliest film appearances.

Leon's wife tries to do something about hubby's fondness for alcohol.

Leon is driven crazy by his wife's addiction to bridge playing.