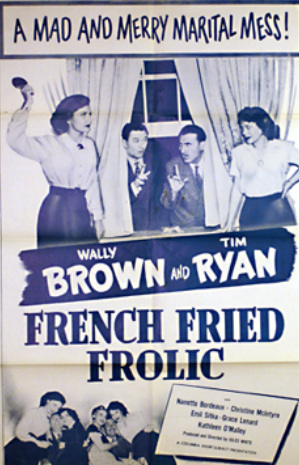 _
Wally Brown was one half of RKO's answer to Abbott and Costello. With "partner" Alan Carney, the duo made some lackluster comedies, often with the support of the likes of Bela Lugosi and Lionel Atwill. Soon, RKO seperated the two, only to pair Brown with comedian Jack Kirkwood for a series of comedy shorts.

In between RKO's "Kirkwood and Brown" subjects, Columbia signed Wally to appear in one of the better shorts from the time period. Actor and screenwriter Tim Ryan was selected as Brown's partner, and the result was a pretty fun 16 minutes.

Was Columbia trying to persuade Brown to leave RKO? Who knows. Brown returned to his series with Jack Kirkwood, and Tim Ryan went on to continue screenwriting and acting.

Their only starring short, FRENCH FRIED FROLIC, is available for review through our archives.

FRENCH FRIED FROLIC (12/8/49) D: Jules White. Christine McIntyre, Nanette Bordeaux, Emil Sitka. Wally and Tim are a couple of insurance salesmen who get into hot water on their first day on the job. TRIVIA: The original working title was A FRENCH FOLLY. Reissued theatrically in February, 1961.