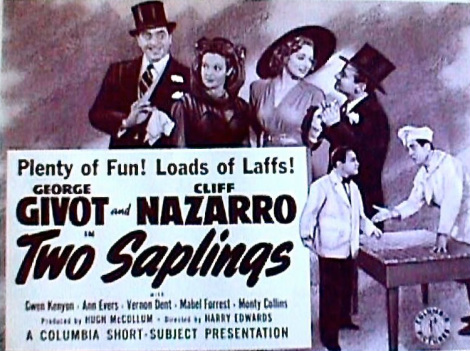 George Givot and Cliff Nazarro were signed for a one picture deal. Givot wasn't given another shot at a two-reeler, but Columbia did find another outing for Nazarro by pairing him with Billy Gilbert in SHOT IN THE ESCAPE.

While SHOT IN THE ESCAPE was made available to television markets in 1959, TWO SAPLINGS has yet to resurface for reappraisal.


TWO SAPLINGS (3/5/43) D: Harry Edwards. George and Cliff, owners of a bank Greek restaurant, visit a bank for a loan and foil a robbery.