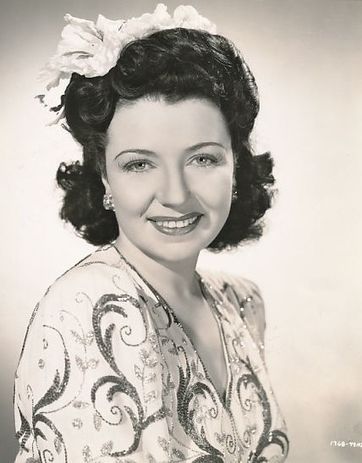 _Vera Vague had been a popular radio character created by actress Barbara Jo Allen in 1939. Ms. Allen became so popular in the role, began to bill herself solely as Vera Vague. She had her own radio show, and soon became a regular on Bob Hope's program.

In 1943, Jules White hired her for a series of two-reel comedies which lasted until 1952. She also narrated a series of shorts for Columbia calleed VERA VAGUE'S LAFF TOURS, however these were produced by another shorts subject unit at the studio.

A number of Vera Vague two-reelers were syndicated by Screen Gems Television in 1959. 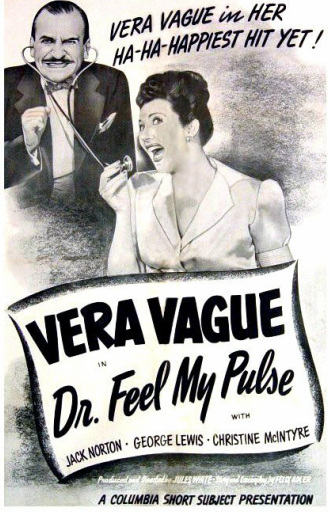 THE JURY GOES ROUND N' ROUND (6/1/45) D: Jules White. Barton Yarborough, Vernon Dent, Mike Mazurki, June Bryde, Frank Alten, Eleberta Casey, Judy Malcolm, Joe Palma, Victor Travers, Blackie Whiteford. Vera, a juror on a murder case, is the only one who believes in the defendant is innocent. TRIVIA: Nominated for an Academy Award.

CALLING ALL FIBBERS (11/29/45) D: Jules White. Etta McDaniel, Frank Sully, Vernon Dent, John Tyrrell. Vera pretends to have been injured in an auto accident in order to get out of two conflicting engagements. TRIVIA: A remake of Walter Catlett's FIBBING FIBBERS (1936). The original working title was LYING LIARS. 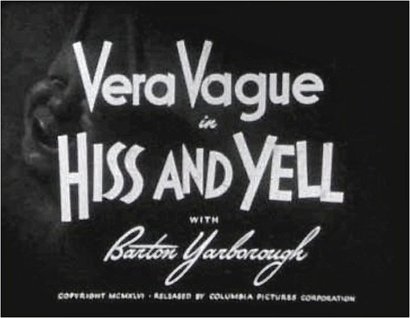 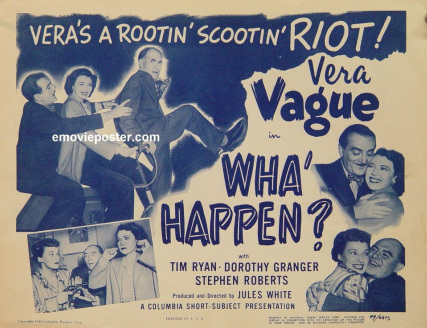 CLUNKED IN THE CLINK (7/14/49) D: Jules White. Christine McIntyre, Douglas Fowley, Vernon Dent. Vera's husband thinks she ahs been killed in a plane crash, unaware she has been arrested for speeding on the way to the airport. TRIVIA: The original working title was LOOSE IN THE CABOOSE. Theatrically reissued in September, 1956.

NURSIE BEHAVE (5/11/50) D: Jules White. John Merton, Sherry Moreland, Jack Pickard. Vera, a hospital nurse, is assigned to care for a district attorney who was injured in an auto accident. TRIVIA: The original working title was NURSES VERSUS HEARSES. Theatrically reissued in November, 1957.

SHE TOOK A POWDER (8/11/51) D: Jules White. George Lewis, Christine McIntyre. Vera's fiancee tries to cure her of her hypochondria. TRIVIA: A remake of DOCTOR, FEEL MY PULSE (1944). The original working title was THE PILL EATER. Theatrically reissued in December, 1956.