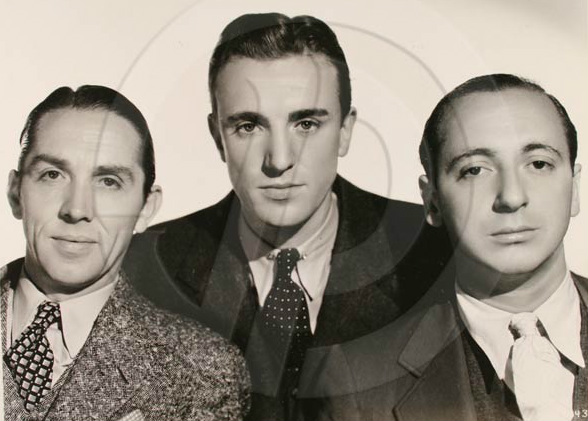 courtesy Jay Parrino
The Radio Rogues (Jimmy Hollywood, Eddie Bartell, Henry Taylor) appeared in a number of feature films, mainly as comic relief or to do various impersonations of celebrities. Columbia signed them in 1935 to appear in their own series of two-reel subjects, which resulted in 3 titles. They also did voice work for a number of cartoon shorts released by Columbia.

Unfortunately, their comedy shorts are not available for reappraisal at this time.

STAR GAZING (9/26/35) D: Benny Rubin. Robert Bobby Burns, William Irving, Eddie Laughton. As proprietors of the All Cities Hotel, the Radio Rogues do impressions of movie stars in order to increase business. Their impressions include Bing Crosby, Parkyarkarkus, Eddie Cantor and others. A Box Office Magazine reviewer labeled the film as "Swell Entertainment".