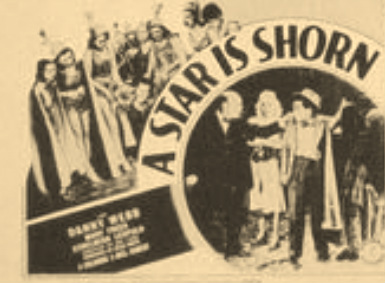 Danny Webb, a talented comic who provided many voices in Columbia's theatrical cartoons, appeared in one enjoyable two-reeler for the studio entitled A STAR IS SHORN. Recently, voice artist and animation historian Keith Scott informed this site that Danny Webb was contracted by Columbia to appear in more two-reelers that were, for some reason, never produced. He did however turn up as emcee in a few COMMUNITY SING shorts.

A STAR IS SHORN (4/21/39) D: Del Lord. Mary Treen, Ethelreda Leopold. Webb, an agent, along with a beauty contest winner and her roommate, attempt to crash Hollywood in grand style. TRIVIA: Parts of this short were filmed atop of the Columbia studios, offering a view of 1939 Hollywood (including the HOLLYWOODLAND sign in the distance). Both title and opening credits spoof the feature length subject A STAR IS BORN.