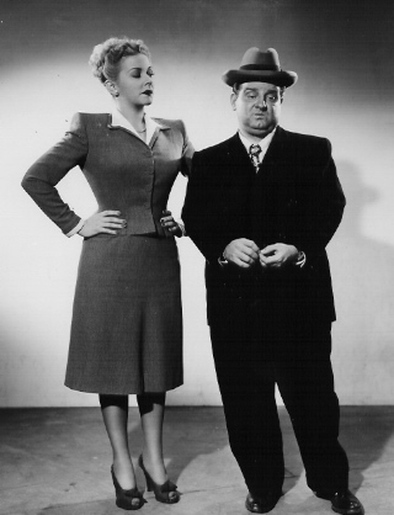 Christine McIntyre co-stars as Joe's wife in his best two-reeler SLAPPILY MARRIED
_Joe DeRita was a very popular Burlesque comedian who was offered a 4 picture deal with Columbia in 1946. The idea has always been that DeRita was being groomed by Jules White to become a member of The 3 Stooges, which he would take the place of Shemp Howard (Shemp had replaced ailing brother Curly). However, DeRita was still a good 12 years from becoming more famous as "Curly-Joe", the role he would be known as until his death in 1993.

All four DeRita solo shorts are available for review through our archives. 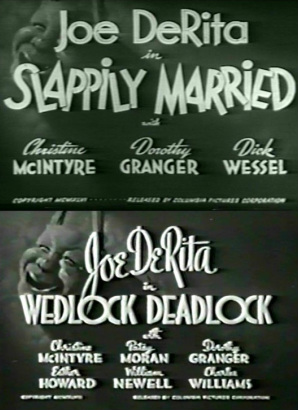 _
SLAPPILY MARRIED (11/7/46) D: Edward Bernds. Christine McIntyre, Dorothy Granger, Dick Wessel, Jean Donahue, Florence Auer, Symona Boniface. Joes wife thinks that he has been flirting with another woman and moves out on him. TRIVIA: A remake of Andy Clyde's A MAID MADE MAD (1943).


JITTER BUGHOUSE (4/29/48) D: Jules White. The Nov-Elites (Joe Mayer, Art Terrry, Frankie Carr), Christine McIntyre, Emil Sitka, Patsy Moran,. Joe and the Nov-Elites cure mental disorders with music. TRIVIA: A remake of The Radio Rogues DO YOUR STUFF (1935). The original working title was NOTES TO YOU. The musical-comedy act of "The Nov-Elites" would also appear in the Columbia feature I SURRENDER DEAR, also released in 1948.